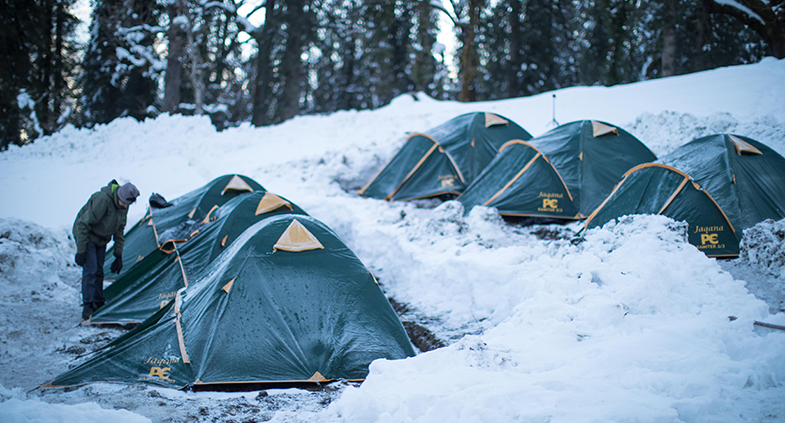 The highest peaks on the planet, the Himalayas are vast across India, Bhutan, and Nepal. These are home to the highest peaks on the planet. While Everest makes most of the headlines, multiple peaks are striking and exclusive in characteristics, existing here are alone and cannot be replicated in any place in the world.  Especially, in the mountain ranges west of the Indus- the Pamir, Hindu Kush, and the Karakoram.

One is lucky to be born in a country that hosts this majestic range. For the trekkers, they will always have a fantasy to trek the Himalayas. Some of us have thought of a reality and some of us are still contemplating. There is always more to learn and more peaks to trek, the Himalayan list is not really exhaustive.

Here are some of the best treks in the Himalayas-

The experience of the Chadar trek can be described in one word – surreal, but the trek is rich with elements of its own. The mesmerizing landscapes, mind-numbing temperatures, or thrilling walk that makes it so phenomenal, but the trek is rich with elements on its own. The simplicity of the Zanskari people and their adaptability and acceptance of the harsh challenges is what captivates trekkers. The route’s history is concerned with the formation of thick ice during winters on the Zanskar river facilities the inhabitants use. Trekking in the Chadar was so risky and unpredictable back in the day.

Beas is where the mighty river Beas originates from. The river starts – flows from the glaciers through the scenic meadows which are surrounded by mountains. From here, you can see the Shitidhar, Friendship peak, and the Hanuman Tibba. From here Dhauladhar and Pir Panjal mountain range is easily spotted.  This trek is rich in various flora and fauna, it is also a favorite spot for shepherds as you can see them camp around with their herds of sheep and watchdogs. Here you can feel a sense of purity of the environment which exists, the water melts purely from the glaciers.

BEST TIME TO VISIT: Mid of May- Mid of Oct

It is known as forbidden forever, it is a very intriguing place in India. The small village has been banned for the public to visit. The public is not allowed to take any photography or videography here or even allowed to touch the people and houses of this place. The trek to Malana starts from Bhuntar, an interesting trek to be taken.

From Triund follow the trail to Laka, and then to Lahesh Cave, from where you will be able to trek to the inspiring Indrahar Pass. With beautiful landscapes, sparkling streams, deep tranquil lakes, and deodar forest all throughout the journey, the Indrahar Pass Trek in Himachal Pradesh is one of the awe-inspiring treks in the Indian Himalayan region, bursts the mind of several travelers from all age groups.

BEST TIME TO VISIT: Mid of May – June & September- Mid of October

The place is known as a place of gods, you also come across the lesser-known and mysterious hot springs on top of Kheerganga. Also, mesmerizing views of Parvati Valley never fail to impress anyone.

BEST TIME TO VISIT:  May – November

Bhrigu lake is very famous and a less-known attraction in the heart of Himachal, the trail waits for the footprints of many to be etched along the route. One of the highest alpine meadows in the country, Bhrigu lake trek gives unmatched views of the Ladakhi peak and the Friendship peak.

BEST TIME TO VISIT:  September – May

The weekend trek starts from Chakrata to the peaks of Deoban Valley which gives a beautiful and mesmerizing view to admire. Chakrata is located at a distance of 330 km. From Delhi it takes an overnight journey. This 15 km long trek gives a scenic view of mountain peaks, surreal and lush green forests, and also a thick canopy.

BEST TIME TO VISIT: December – May