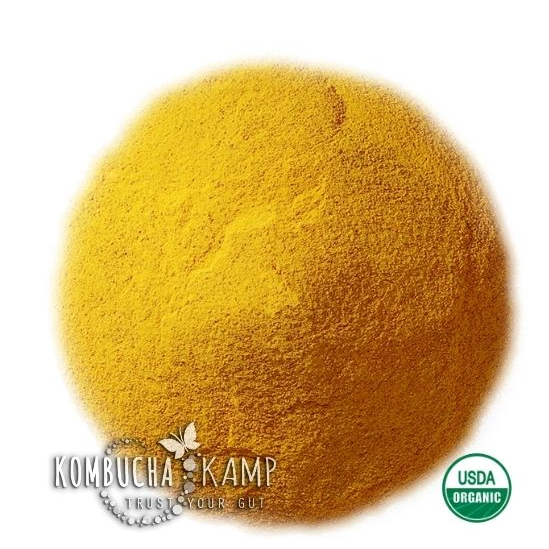 Turmeric is a golden yellow spice that has gotten extra attention in the last few years with increased awareness of its benefits. The recipes made from turmeric, like organic turmeric powder, also played a crucial role in this extra attention. In the family of ginger, turmeric is a flowering plant. Curcuma longa is its scientific name. The rhizome stems, or underground root system of the turmeric plant, have been used by people for thousands of years to produce tea. The same type of turmeric is also used in health care, cooking, spirituality, and other areas. Read below to know more about the amazing reasons to drink organic turmeric powder tea:

What is organic turmeric tea?

Turmeric is most often used as a spice in various cuisines. Turmeric tea is created by brewing dried, grated, or powdered turmeric instead of the dry leaves used in many other teas. It is a desirable tea due to the high concentration of curcumin, a molecule known for its antioxidant and anti-inflammatory qualities. Turmeric can be made at home by brewing fresh turmeric in hot water. Turmeric tea is also available in tea bags and loose leaf form. Turmeric is frequently combined in loose teas with additional spices like cardamom, black pepper, ginger, and cloves. Since black pepper can boost curcumin’s absorption by up to 2000%, experts advise drinking turmeric with it. The majority of grocery stores and internet retailers sell turmeric tea, which is easily accessible. You may avoid purchasing turmeric items containing cheap fillers and dyes by reading the ingredients list on turmeric tea blends or powders.

Most discussions of turmeric’s health benefits center on curcumin. However, turmeric or turmeric powder includes other nutrients as well. One teaspoon of dried organic turmeric powder contains,

Bioactive components are the nutrient that promotes health in humans. These include typical vitamins and minerals in addition to lesser-known substances like volatile oils and polyphenols. Turmeric tea includes hundreds of different bioactive substances, including several volatile essential oils. It also has different kinds of antioxidants and curcuminoids like curcumin, which make up the largest category of bioactive components.

The 1 cup of turmeric tea probably has between 10 and 30 calories, depending on the type and amount of turmeric used. This is without any added milk or sweets, like honey. As a result, turmeric tea is an apt substitute for high-calorie drinks like soda, juice, and alcohol. It is more important if you are trying to cut calories from your diet. There is no caffeine content in plain turmeric tea. Since it won’t interfere with your sleep cycle, it’s a great tea to have in the late afternoon or evening. Additionally, it blends well with other decaffeinated teas like chamomile. However, green or black tea, both of which contain caffeine, are frequently combined with turmeric tea in mixes. If you need to enjoy turmeric tea without caffeine, then make sure to find a tea that is caffeine free.

The anti-inflammatory properties of turmeric are well known. This is a result of curcumin, a substance that has anti-inflammatory properties. For those with particular medical conditions, wintergreen leaf and organic turmeric powder are frequently advised to use. These include inflammatory diseases, lung disorders, liver damage, Alzheimer’s, and arthritis. Turmeric tea is the best beverage for enhancing immune function because it is high in antioxidants. It is regarded as a treatment for cold and flu symptoms due to its antiviral and antibacterial qualities. The consumption of turmeric tea may also help to prevent cancer. These are the major health benefits of organic turmeric powder.

How often should you drink organic turmeric tea?

The recommended daily intake of turmeric ginger tea does not have a set dosage or precise measurement. Due to the high potency of turmeric ginger tea, you can experience the above-mentioned health advantages when drinking it sometimes. The recommended daily intake is 1-2 cups. Ginger root extract, which is also sold as a supplement, can be used to make turmeric ginger tea. It works best when taken daily in amounts of 1,500–2,000 mg. Additionally, there are turmeric supplements that offer a higher concentration of curcumin. It can be taken daily in amounts as high as 1000 mg. Consuming more than this can make some side effects more likely.

Turmeric tea can be the perfect choice for you if you are seeking a distinctive and healthy beverage to add to your day. Turmeric tea and wintergreen leaf are often consumed as part of lovely rituals. Additionally, the tea has zero calories and no caffeine content in it. Give organic turmeric tea a try and see what you think. If you are satisfied with the health benefits, you can suggest it to your friends and family.

In this article:organic turmeric powder